I met Matthias Runne quite by accident outside a supermarket in Mansle one day while out cycling , we got chatting about Solar Installations and he gave me his business card which boasts of “German quality for your construction and renovation projects”. 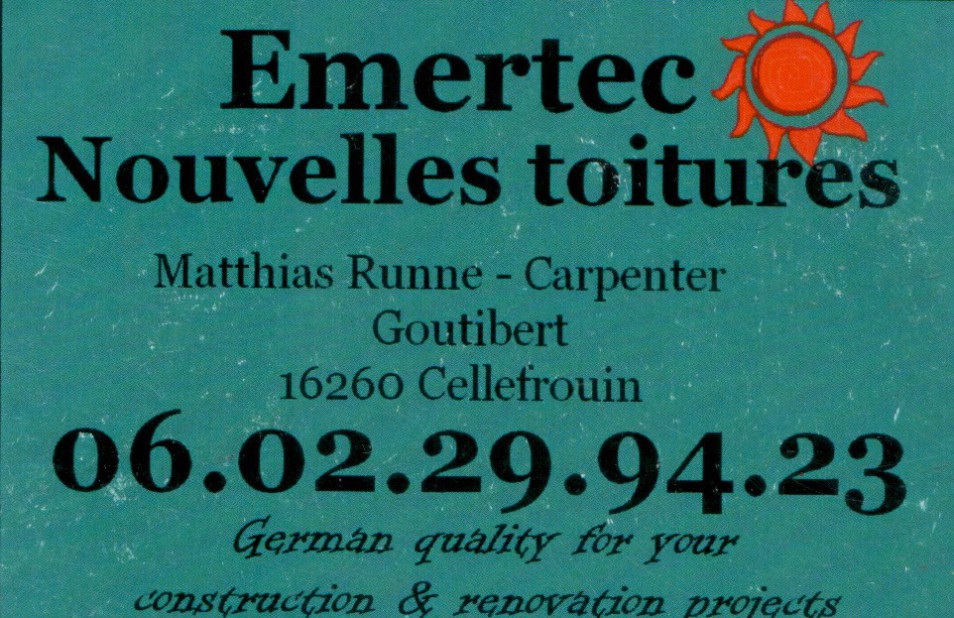 “German quality for your construction and renovation projects”

We visited him a month later and looked at his own solar installation in Cellefrouin (16260) as well as some PowerPoint presentations of his previous industrial installations which looked impressive.

He told us he wanted us to be happy with his work to the point where we would recommend him to others.

Later we decided to go ahead and asked him to quote us for our own off-grid solar installation.

His on-site survey was done without any form of notes or measurement which caused me some concern.

Matthias Runne specified 2000w of solar panels (8 x 250w) and 1680Ah battery capacity (6 x 280Ah) using a kit from the German company Bau-Tech , he later claimed it took him 100s of hours to decide on the components and organise it yet Bau-Tech offer this as an all-in-one kit. Odd.

The first week was spent erecting the scaffolding and installing the roof mounts under the tiles , then the aluminium bars that the panels sit on and eventually the panels themselves.

This all went well if a little slowly.

The installed solar panels are mostly level , the top left side is slightly higher than the rest but this is purely cosmetic.
Matthias offered to make it level afterwards but this would mean more work and more broken tiles for no benefit.

During the roof work Matthias Runne broke two wheelbarrow loads of roof tiles but replaced them with our stock of spares.

Upset that he was walking on the roof and continually breaking tiles I suggested he just move the tiles out of the way until he’s finished as this would make it safer , easier and less damaging , he ignored this advice.

During the solar panel installation I asked about earthing the frame and panels , only at this point did Matthias Runne offer to earth it.
Research on the internet later shows this to be incredibly important for safety reasons.
Shouldn’t this be done as a matter of course and included in the total price ?
I had to source and buy the earth spike and cable myself.
Matthias Runne installed the cable , it travels down the side of the barn in quite an untidy fashion , it could be much tidier. 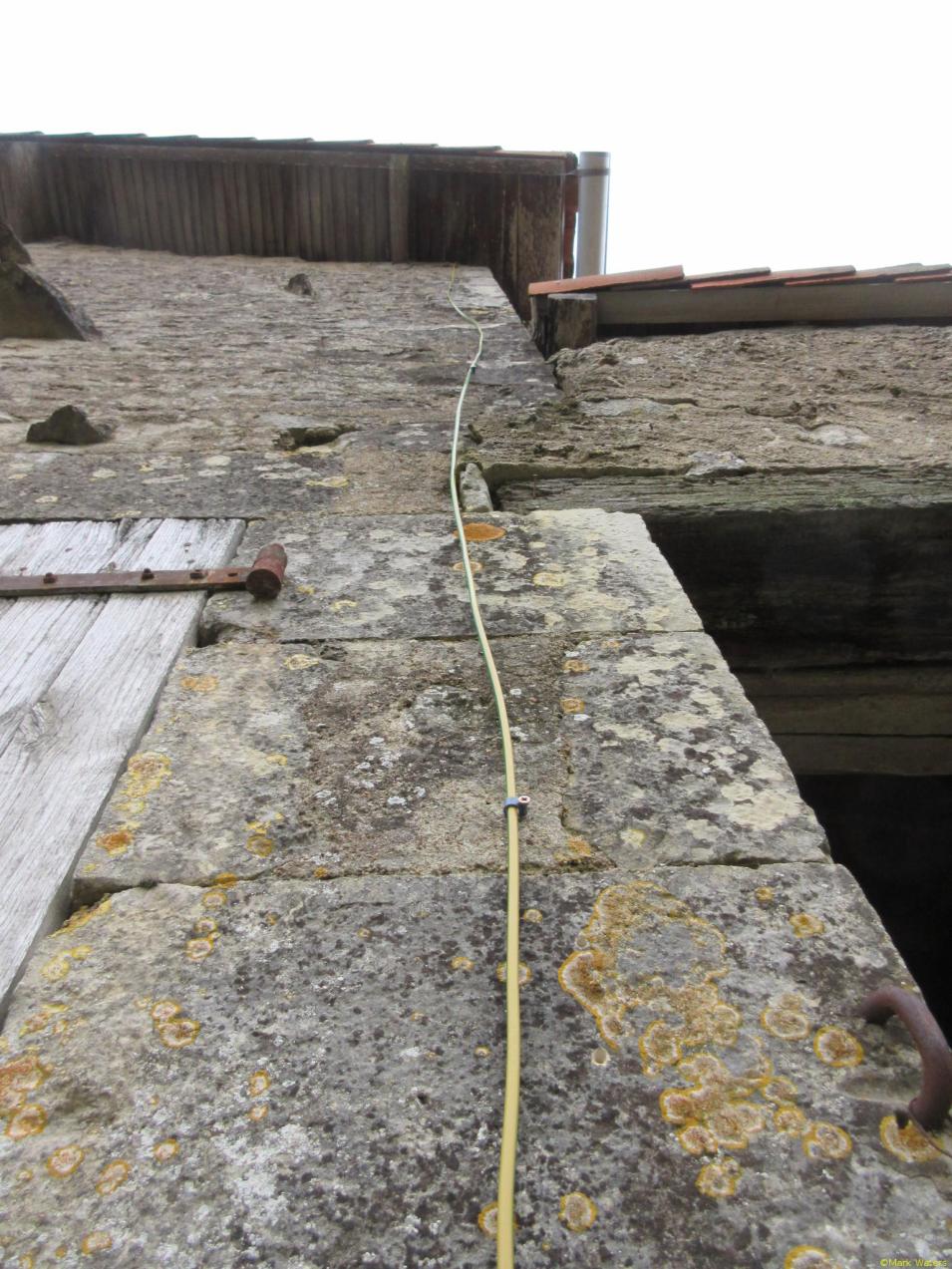 The second week of the installation started with Matthias realising that the kit-supplied 15 metre cables were insufficient to get the power to the charge controller in the house.

As Matthias doesn’t hold any stock we had to order and pay for the extra cable from Bau-Tech , along with a 15 Euro carriage fee.

The RC4 connectors were also not held “in stock” by Matthias , once again these had to be ordered separately from Bau-Tech , even worse Matthias only ordered four connectors , if one was faulty in manufacturing or fitting then it would have meant another delay and another 15 Euros carriage fee.

These RC4 connectors are just two euros per pair , any reputable Solar installer would hold the cable and connectors “in-stock”.

One of the components in the Kit is the inverter , this converts the 24V DC stored electrical power to the usable 240V AC.
Matthias does not hold these in stock either of course.
If a problem occurs with this device we will be without power to the entire house for probably five days while a new inverter is delivered from Germany.
This could be a disaster during winter when we need electricity for the oil-powered boiler , heating , lighting , etc.

I would have thought the trunking for the solar cables would be included in the price of the installation , I was wrong.

Matthias wanted to tack the bare solar cables (24v DC) directly to the outside of the barn , this didn’t seem safe or attractive.
I insisted the cables go through the barn and when outside be put into protective trunking.

The only trunking installed was the outside section between the two buildings and only because I insisted.
We had to use old trunking that we already had on-site , Matthias didn’t offer to replace this. 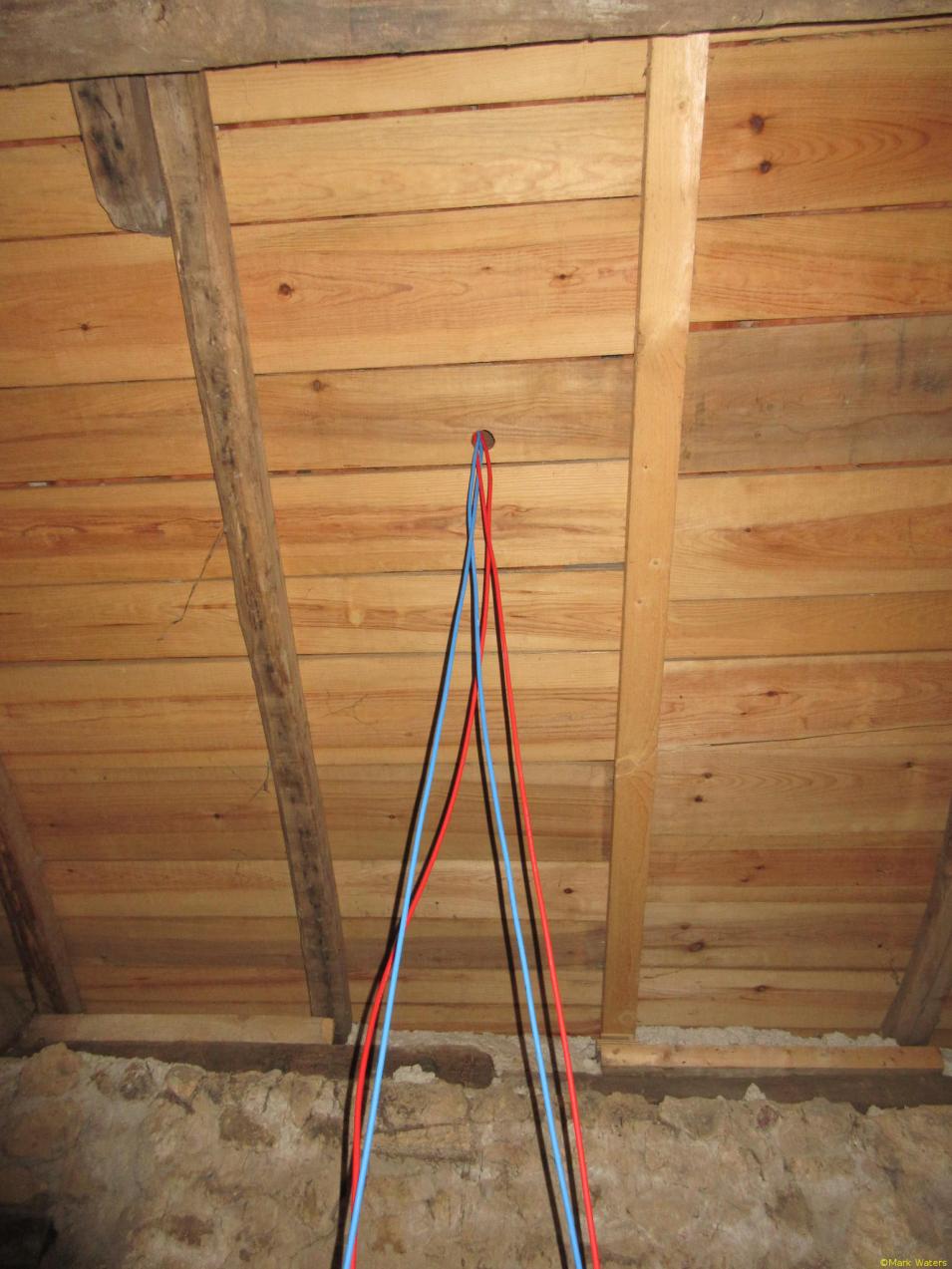 These are the 24V DC solar cables emerging from the roof , they just fall to the floor , unprotected and unsupported. 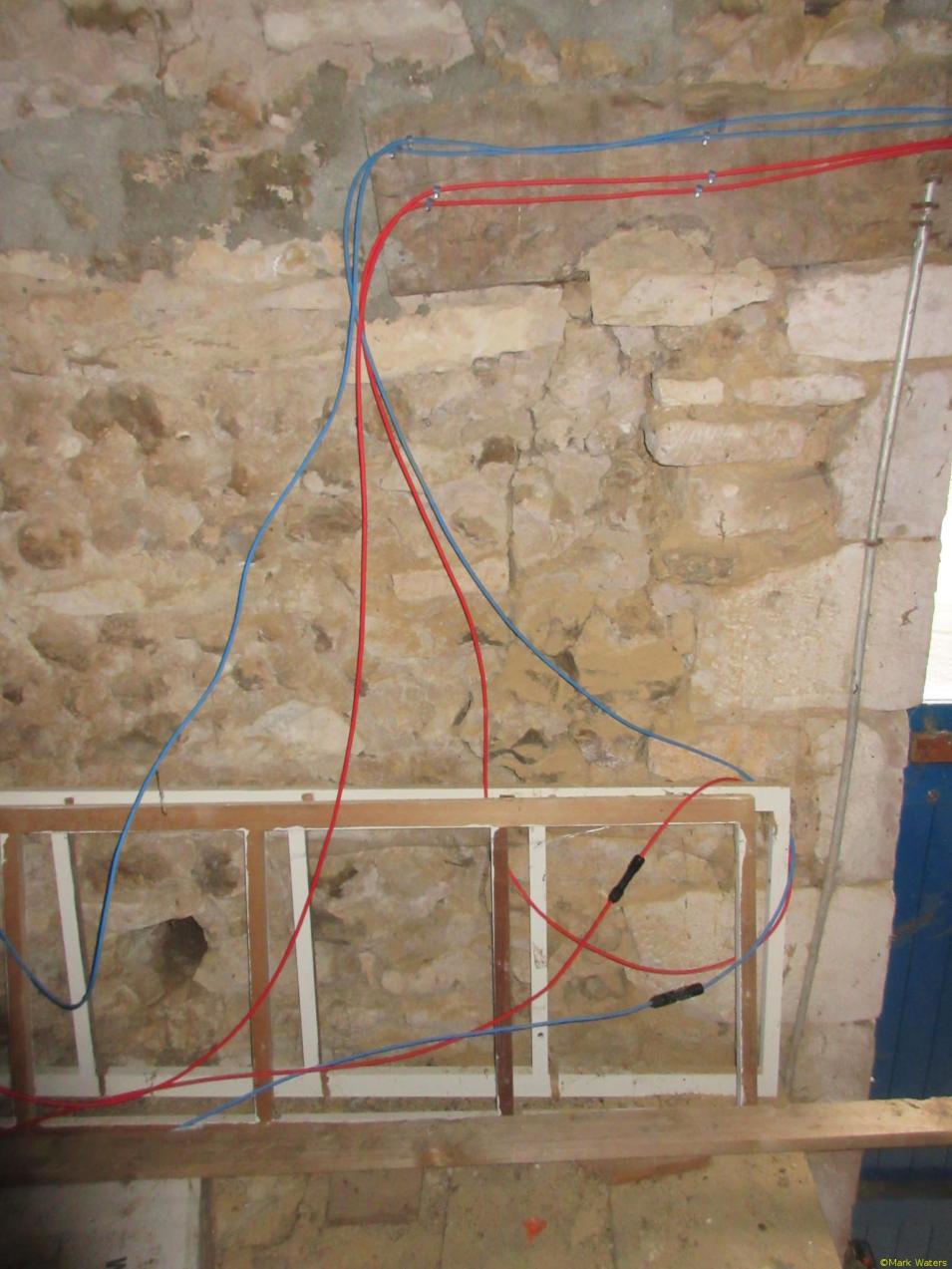 Above are the solar cables and RC4 connectors , this is where the original 15 metre cables join the longer cables that go back to the house.

This is not the cable management I expected from a ‘German quality’ solar installer like Matthias Runne. 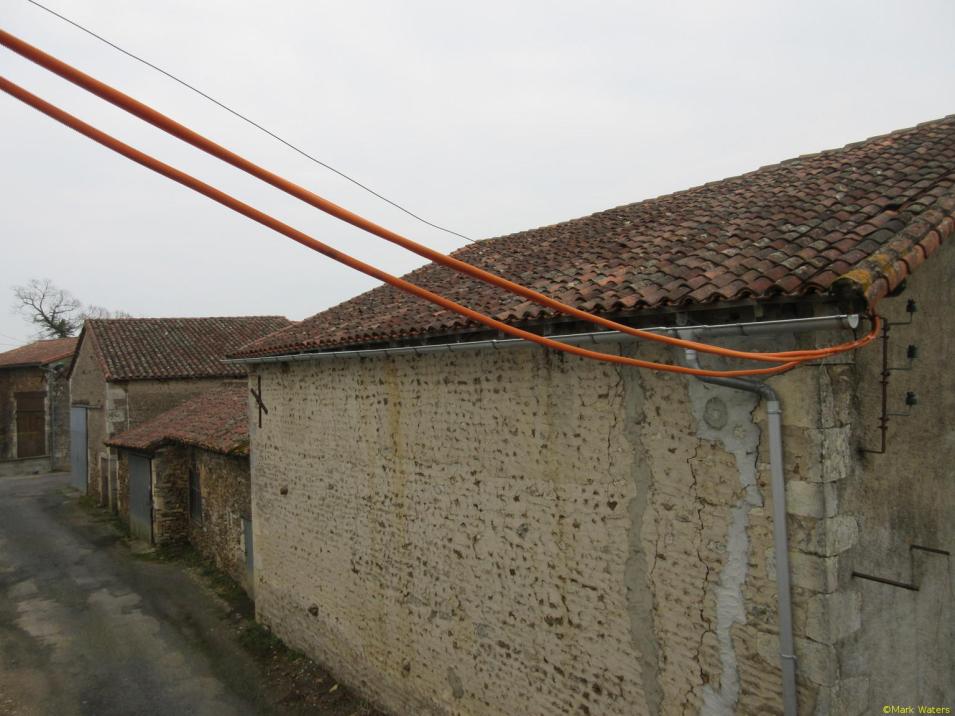 I asked for the solar cables to be protected in trunking while outside and supported by the wire , this is how Matthias Runne has left it , very unprofessional.

In the last week I have installed the mains wiring in the house , the sockets on the wall and made the double-ended plug that connects the inverter to the house wiring , Matthias didn’t offer to do this work at all even though it is part of the installation.

Matthias arrived today to fix the dangling cables between the house and barn , instead he just got his tools out of the barn and loaded them into his car.

Before giving him the final payment we asked him to go through the issues we have with his work.
It was quite upsetting to have to tell him how disappointed we were given his claims of ‘German quality’.
He sat quietly initially but got more and more angry as we discussed it , very unprofessional.
Instead of debating my points and offering solutions he kept repeating how ‘not cool’ it was for us to bring these issues to him.
He also kept telling us he should have made sure he got fully paid before completing the work even though it was his suggestion that we paid him before and after the job , he was only interested in the money.

I wish he had been honest with us and only offered to install the solar panels on the roof , we could easily have found a professional electrician to install the cabling safely instead.

Matthias Runne seems like a nice guy , we got on well while working together and I hoped we would remain friends.

Unfortunately his unprofessional attitude and shoddy workmanship on our installation means I will definitely not recommend him.